You are here: Home / David's Favorite / The Arc of Night over Prairie Creek Redwoods State Park

It was approaching 12:30 a.m. at Prairie Creek Redwoods State Park as the Core of our galaxy began to crest the redwoods beyond the meadow, anchoring the band of Milky Way that stretched across the sky from horizon to horizon. But close behind it was the moon, which, though waning, was still 74% large, and bright enough to wash out the Milky Way once it had risen. At that point I had only a few minutes to shoot before I lost the sky to the moon. But I had come for this.

Shortly after shooting the panorama, the moon crested the horizon and washed the color and detail from the Milky Way, and a subsequent panorama was less satisfying. The moon’s pale glow can be seen in the center of the accompanying image as it rose behind the redwoods. Also rising behind the Milky Way were the planets Jupiter and Saturn, but the moonlight had dominated the sky before they cleared the redwoods. Those two planets will be following the Milky Way across the sky all season, and I plan to bring images of them to you in the coming months.

Prairie Creek Redwood State Park is located about 50 miles north of Eureka. It is one of several parks along California’s north coast that is co-administered by both the National Park Service and the California Department of Parks and Recreation. As with other state parks, Prairie Creek is only open for day use due to the COVID-19 pandemic. Parking is limited, and there is no camping. Visit the State Parks COVID-19 Resource Center during the pandemic for the full status of specific parks and for visitor guidelines: https://www.parks.ca.gov/?page_id=30350 .

END_OF_DOCUMENT_TOKEN_TO_BE_REPLACED 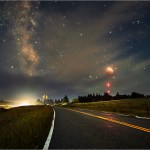